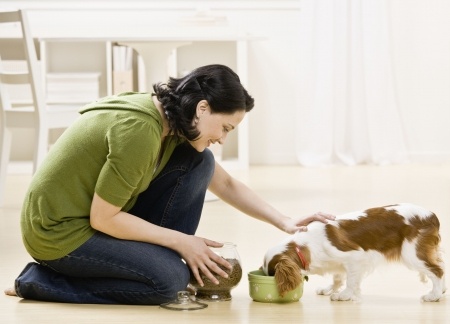 Because the Lymphocytes affected by Canine Lymphoma are found in virtually every organ in the body, Canine Lymphoma Symptoms vary significantly depending on the location where the cancer is growing.

In most cases, Canine Lymphoma will show itself first in the enlargement of one or more lymph nodes that can be seen or felt from the body surface. These swollen lymph nodes will most commonly be found in the “sub-mandibular” region (directly under the patients jaw), and in most cases won’t be painful, though in some cases they may interfere with certain bodily functions (such as air flow or swallowing).

Initially You May Not Notice Any Canine Lymphoma Symptoms

In the majority of Canine Lymphoma cases, pet owners won’t notice any telltale Canine Lymphoma Symptoms until the disease has been growing in their pet for some time. There are several reasons for this.

(Note: Cases of high grade or acute lymphoblastic lymphoma can progress within 1 to 2 months to the point where a patient becomes very ill, so dogs who have this version of the disease tend to be diagnosed fairly quickly. However, dogs with low grade lymphoma can have the disease for many months before it causes problems.)

First, because many dogs with Canine Lymphoma show no signs of illness at all. Often, an owner simply notes a new swelling or lump. In those cases the volume of disease may be low enough that it is not making them ill.

Second, because dogs are historically pack animals, they tend to be very good at hiding sickness and other health problems. (In the wild, their ability to stay with the pack, and hence their survival, depended upon their being – or at least seeming to be – healthy and strong and able to keep up with the pack). So most dogs tend to hide the signs of sickness until the disease has significantly progressed and they can no longer hide (or ignore) the problem. And…

Third, Canine Lymphoma symptoms are often similar to symptoms of other diseases. For example, when Canine Lymphoma is centered on an organ (such as the liver, spleen, or bone marrow), the cancer may disrupt the normal functions of the organ and the symptoms may just reflect the organ system involved (for example, vomiting or diarrhea, impaired production of blood cells from the bone marrow, etc.).

For that reason, pet owners can miss the fact that something may be significantly wrong with their dog’s health. This is why Canine Lymphoma is often discovered by your vet during a check up and is one of reason why we always recommend regular check-ups for your dog.

In addition, dogs with Canine Lymphoma may exhibit some generalized symptoms that may signal the onset of the disease. Some of these symptoms are listed below.

Lymph nodes exist at many points throughout your dog’s body. Many are near the body surface, but some are deep under the surface and cannot be easily seen or felt from the outside of your dog’s body. 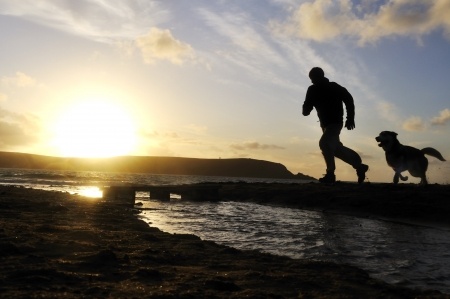 Other common areas where swollen lymph nodes may signify Canine Lymphoma include the chest area, armpits, behind the knees, in the groin area, or some combination of these areas.

Because Canine Lymphoma and other types of cancer often present themselves as enlarged bumps on the surface of a dog’s body, we always recommend that dog owners spend lots of time, petting, scratching, and exploring around their dog’s body. Not only do dogs (obviously) LOVE this attention, but it’s also one of the best ways to notice changes and bumps that may be signs of the early onset of Canine Lymphoma or other health problems. Don’t be afraid to ask your vet to show you how to find your dogs lymph nodes.

Although swollen lymph nodes are by far the most common Canine Lymphoma Symptoms, dogs with Canine Lymphoma often show other, more generalized, signs and symptoms that something may be wrong.

For example, dogs with Canine Lymphoma may show some or all of the following symptoms…

And remember, one of the biggest factors in terms of your vet’s ability to treat Canine Lymphoma depends on how early you can detect and start treating the disease. So bringing your dog to your vet for check-ups at the onset of any Canine Lymphoma symptoms can go a long way towards helping your dog live a longer and healthier life.

Note: You can also find more information on this topic in this Purdue Veterinary School .pdf that includes a good section on Canine Lymphoma Symptoms